Family visits Yale, in honor of man who inspired Christianity in Hawaii 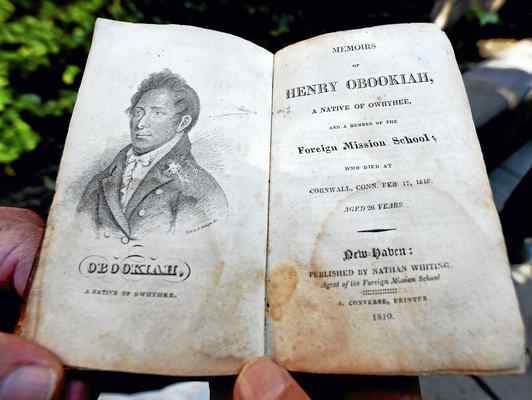 NEW HAVEN >> During an early 19th-century journey from Hawaii, Henry Opukaha’ia spent time in New Haven that would begin his education and prove pivotal in bringing Christianity to his faraway home.

On Tuesday, descendants of Opukaha’ia — often Americanized to Obookiah — visited the city and Yale University, where their ancestor was found weeping on the steps of Connecticut Hall, wishing he could get an education like the students he saw around him.

They had come from Cornwall, where Opukaha’ia had been one of the first students of the short-lived Foreign Mission School, founded 200 years ago.

Opukaha’ia had traveled to Connecticut to mark the bicentennial of the school, which closed in 1826, but not before Opukaha’ia had inspired others to travel to Hawaii to bring the gospel to the indigenous people there. Opukaha’ia wouldn’t make it back alive, dying of typhoid fever in 1818 at age 26, according to his distant cousin, Deborah Liikapeka Lee of Hilo, who led the effort to return his remains to Hawaii 24 years ago.

Opukaha’ia’s story is one of “how a boy changed the course of Hawaii’s history forever by inspiring the missionaries to bring the gospel of Jesus Christ to the islands and bring salvation and freedom to his people,” Lee said.

Opukaha’ia’s journey began when, during King Kamehameha’s campaign to unite the Hawaiian islands, “his parents were killed in a tribal battle,” Lee said. In trying to run away with his 2-year-old brother, a warrior’s spear killed the younger boy, Lee said. Opukaha’ia’s life was spared, but he was sent to live with the man who killed his family, Lee said.

“One day, he sees this ship, which is the Triumph, and he’s curious about it, so he swims out and he’s invited on board by the captain,” Caleb Brintnall, said Lee, who insists her ancestor was a guest, not a stowaway.

Brintnall “was a sealing captain and he made several circumnavigations and he was a prominent member of the New Haven community,” according to Christopher Cook of Kauai, who wrote “The Life of Henry Obookiah” and is coordinating the bicentennial in 2020 of the missionaries’ landing in Hawaii.

When they arrived in New Haven, Brintnall took Opukaha’ia into his home, which is now the Yale club Mory’s, although the building has been moved. Opukaha’ia then lived with Yale President Timothy Dwight IV. “He became a servant in Timothy Dwight’s house,” Cook said.

It was during this brief stay in New Haven that Opukaha’ia’s life took a fateful turn.

Edwin Dwight, Timothy’s cousin, was “the gentleman who finds Opukaha’ia weeping on the steps [of Connecticut Hall] and he asks, ‘Why are you weeping?’ and he says, ‘I seek the knowledge in the books that the students are carrying under their arms,’” Lee said. Dwight, along with other Yale students, tutored Opukaha’ia, who had learned some English aboard ship but was otherwise uneducated.

Dwight then took Opukaha’ia with him to Cornwall when Dwight became the first principal of the Foreign Mission School, founded by the American Board of Commissioners for Foreign Mission, which existed in order to train missionaries to bring Christianity back to their native culture.

“He gains four languages: Hebrew, Latin, Greek and English, and he’s credited with translating the Book of Genesis into Hawaiian,” Lee said. He also started a grammar of the Hawaiian language, which had been primarily an oral language, she said.

Lee said the family also was able to view a sample of Opukaha’ia’s penmanship while at Yale. “It was very legible, very fluid script,” she said.

Ka’ila Hoomanawanui Williams of Hilo, Hawaii, said she came to Connecticut “to walk the grounds, see the views, experience the landscape that my cousin experienced. I’m here also to take back to the rest of the family what I’ve gained here and include them into this journey.”

Lee said Opukaha’ia’s conversion to Christianity “wasn’t a quick conversion. It had been maybe five years that he had been in New England, but one day he went to an open field and knelt down and gave his life to the Lord.”

Another event in Opukaha’ia’s conversion occurred when he became ill and almost died during two years he spent in Hollis, New Hampshire. Cook said Opukaha’ia “went from not being serious about Christianity to really becoming a committed Christian.”

Lee’s part of the story begins in 1992, 174 years after Opukaha’ia’s death and burial in Cornwall Center Cemetery. “I was living in Seattle, Washington, at the time,” she said. “On Sunday, Oct. 11, 1992, I woke up early in the morning with the need to read my genealogy of how I was related to Opukaha’ia and to read an article about his life written by the Rev. Edith Wolfe,” who was originally from Goshen.

Suddenly, at her “core,” the thought came to Lee: “He wants to come home.”

Exactly 10 months later, on Aug. 15, 1993, Opukaha’ia was reburied at Kahikolu Congregational Church cemetery in Kona, the Big Island. Lee’s family was assisted in exhuming Opukaha’ia’s remains and repatriating them to Hawaii by Nick Bellantoni, now retired as the state archaeologist. Bellantoni, who joined the tour Tuesday, said he and Lee have kept in touch.

“The people of Cornwall [weren’t] so thrilled because after 1875, they claimed him as their own,” Lee said.

Although Opukaha’ia never made it back to Hawaii during his lifetime, his legacy was significant, Cook said. “He was supposed to be one of the lead missionaries to Hawaii, but he died,” Cook said. However, “he sort of secured America’s foothold in Hawaii by the missionaries coming.”

He said American values are “the foundation for business, law, medicine, justice, literacy,” and that Opukaha’ia was a major factor in that transformation.

“Next year will be the 200th year of his passing” on Feb. 17, 1818, Lee said. On Feb. 17, there will be simultaneous ceremonies honoring Opukaha’ia in Cornwall and Kona. “So being here right now in New England starts out our bicentennial celebration for the next four years.”