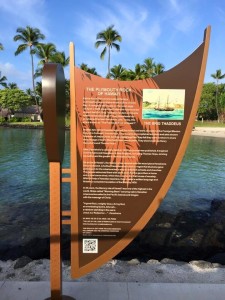 The first missionaries to arrive in the islands were from New England. Sailing in the Thaddeus, 14 missionaries (seven couples) and four Hawaiian boys left Boston. They arrived in Hawaiʻi after 164 days. While at sea, King Kamehameha the Great died, his son Liholiho became ruler, and the ancient kapu system was abolished, with no belief system to take its place.

This historic marker was designed for the local churches to commemorate the 195th anniversary of the fulfillment of Hawaiian high priest Hewahewa’s prophecy: that the new God would come to this same rock.

Hewahewa himself burned his own temple in faith of what was coming. The first man ashore brought his Bible, protected in a black wooden box as he stepped on the very same rock at Kailua pier, changing Hawaii forever. With the prophecy complete, many of the Aliʻi royalty of Hawaii became Christians and avid readers of scripture. 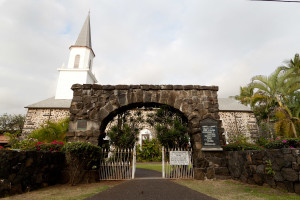 THE ARCHWAY: In 1910, the Evangelical Association of the territory ofHawaiʻi met in Kailua to celebrate the 90th anniversary of the coming for the first American congregational missionaries to Hawaii in 1820. In honor of this occasion, Mokuaikaua Church was repaired, and a stone arch was built to commemorate the anniversary.

THE SANCTUARY: Two other structures were built prior to the present church. The first was built as the King’s home prior to 1820, and the second was built as a church in 1825. The present structure was started in 1835 and dedicated in early 1837.

Many of Hawaiʻi’s churches and ministries have given generously to erect the Kailua Village historical marker that tells the story of ” Hawaiʻi’s Plymouth Rock.”

The first Christian church established in the Hawaiian Islands lives on to this day in an active and caring fellowship called Mokuaikaua Church.

Find out about preserving Mokuaikaua Church