Description of the organization’s background, purpose and goals: 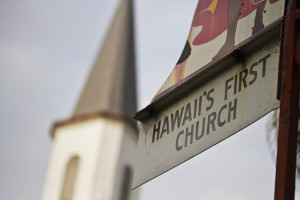 Mokuaikaua Church is a large stone building centered in a small level lot near the center of Historic Kailua Village, Kona, Hawaii. Its high steeple stands out conspicuously and has become a landmark from both land and sea. Its spire is shingled and there are bartizans at the top of the rectangular base. The central core of the steeple is polygonal with alternating sections of wide and narrow clapboard. The wider sections are articulated with louvered arches. The 48 x 120 feet lava rock and coral mortared church is capped with a gabled roof. Construction beams are made from ohia wood. Pieces of the wooden structure were joined with ohia pins. The spanning beams are 50 feet long and are made from ohia timbers. Corner stones were set in place 20 to 30 feet above the ground. 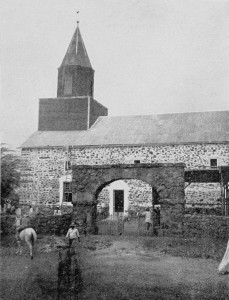 Inspired by Henry Opukahaia’s faith and determination to bring the Gospel to Hawaii, Congregationalist missionaries from Boston crossed the Atlantic Ocean aboard the brig Thaddeus, rounded Cape Horn and 163 days later anchored off the village of Kailua on April 4, 1820. The Congregational Protestant missionaries were seven couples sent by the American Board of Commissioners for Foreign Missions and led by Hiram Bingham. Asa and Lucy Thurston remained in Kailua while their fellow missionaries went to establish stations elsewhere in Hawaii. A replica of the Thaddeus is on view in Mokuaikaua Church.

Completed in 1837, Mokuaikaua Church represents the new western architecture of early 19-century Hawaii. The original grass hale church was built in 1823, but was destroyed by fire in 1835. This stone and mortar building was likely built of stones taken from a nearby heiau and lime made of burned coral.

King Kamehameha II gave the missionaries permission to build their church and meetinghouse. Under the direction of Governor John Adams Kuakini, Asa Thurston had the present Mokuaikaua Church constructed. Its size indicates the large Hawaiian population living nearby in the early 1800s. Governor Kuakini oversaw construction of both Mokuaikaua Church and Hulihee Palace (located across the street). Hulihee Palace was the gracious residence of Governor Kuakini and a favorite retreat for Hawaii’s royalty.

Mokuaikaua likely takes its name from a forest area above Kailua, Kona from which timbers were cut and dragged overland to construct the ceiling and interior.

Mokuaikaua Church was added to the National Register of Historic Places in 1978 and on June 23, 2014 recognized by the National Trust for Historic Preservation and designated one of the 11 Most Endangered Historic Site in the United States.